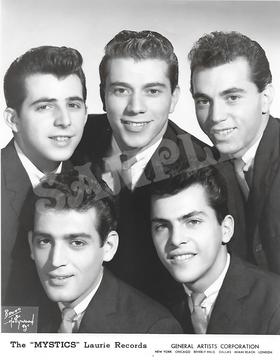 The ORIGINAL Mystics Reuniting for a Special REUNION Appearance

For the first time in over forty years, the five original members

of The Mystics are reuniting for two performances.

Ferrante and Al Contrera formed a group called The Overons.

Soon after, they changed their name to The Mystics and, in

late-1958, they recorded two songs for

The record company was unhappy with the results and sent

songwriters Doc Pomus and Mort Shulman off to write a song

for the group but their first tune, "A Teenager in Love", was

given to Dion & the Belmonts.  Their next song, "Hushabye",

became the Mystics first official single and their biggest hit,

Phil Cracolici left the group in 1960 and was replaced by Paul Simon and, later, Jay Traynor but the group broke up in 1961.  The original five members reformed in 1969 and worked the oldies circuit for a couple of years before, once again, going their separate ways.

On Tuesday (January 16), the band posted the following to social media:

Want to be part of a HISTORY MAKING REUNION! The 5 ORIGINAL MYSTICS- George Galfo, Phil and Albee Cracolici, Bobby Ferrante and Al Contrera will be Reuniting for the 1st time in over 40 yrs for 2 appearances ..March 1st, 2018 at The Strand Theater, Lakewood, NJ and March 2nd, 2018 at The Space Theater, Westbury, NY. Joining The Mystics on these 2 concerts will be a host of other groups.. Tickets will go on Sale on January 19th!.. Check for more information on MARCH 1st lineup & tickets.https://public.ticketbiscuit.com/Strand/Events/330825. Check for more information on MARCH 2nd line up & Tickets http://poprockdoowopp.com/…/pop-rock-doo-wopp-live-westbury/


The March 1 show also includes the Duprees, the Reflections, the Elegants, the Charts, the Devotions, the Del-Satins, Little Caesar & the Romans and the Mello-Kings.

The March 2 show has the Reflections, the Charts, the Devotions, Little Caesar & the Romans, the Del-Satins, the Excellents, the Mello-Kings and the Mystics.